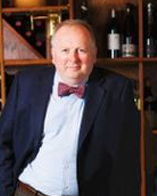 Francis Schott is co-founder and beverage director of Stage Left Restaurant in New Brunswick, NJ.  Stage Left has been one of the best dining and beverage destinations in NJ since it opened in 1992.  The pioneering beverage program included a focus on estate-bottled wines from small producers, a stock of extraordinary and uncommon spirits and aged beer.  With the help of Dale DeGroff, Francis established Stage Left’s craft cocktail program in 1993, which Francis will point out, is about 10 years before anyone gave a damn.

In 2006, Francis opened Catherine Lombardi, an Italian-American restaurant based on the cooking of business-partner Mark Pascal’s Brooklyn grandmother.   The restaurant shares a cellar with Stage Left and boasts 1,000 well-curated labels.  The Cocktail Bar at Catherine Lombardi was the first purpose-built cocktail bar in NJ and it remains the grandmother of cocktails in NJ.  The Spirits Project at Catherine Lombardi is an ongoing educational tasting of extraordinary spirits, made available in one ounce portions at cost, weekly.

Francis, his partners and his restaurants have been featured in The New York Times, Cheers, Food Arts, The Star Ledger, The Food Network, Eater, FoodBelfast and The Irish Echo.

In addition to his own restaurant operations, Francis consults on fun projects here and in Ireland.  He is Co-Host of The Restaurant Guys Radio program (www.RestaurantGuysRadio.com) and is in demand as a public speaker.  His TEDx talk on restaurants and community can be found online.

Francis was an early graduate of the B.A.R. 5-Day program and still classifies himself primarily as a bartender that knows a thing or two about wine and running restaurants.