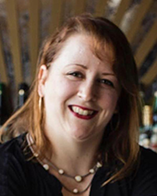 She has worked with managing partners Yves Jadot & Alberto Benanati since its Raines Law Room 2009 opening. In June 2014, she and the RLR team opened Dear Irving, a cocktail bar in the Gramercy neighborhood. Dear Irving was a Top 10 finalist for Tales of the Cocktail Best New American Cocktail Bar, and listed by Esquire Magazine as one their “Best Bars in America”.

In October 2014, the same partnership opened the second outpost of Raines Law Room at the William Hotel. In November 2015, the trio opened The Bennett in the TriBeCa neighborhood.

Meaghan oversees the 4 bar programs, including cocktail creation, menu rotation, events and staff training.  The internationally renowned cocktail program at Raines Law Room was a Top 10 finalist is 2012 Tales of the Cocktail “Best Cocktail Menu” category. Raines Law Room has also been featured in the New York Times and GQ, among other notable publications.

In April 2011, Meaghan opened Lantern’s Keep at the Iroquois Hotel, which was also a Tales of the Cocktail top 10 finalist for “World’s Best Hotel Bar”.

Meaghan is proud to be a founding member of the New York City chapter of LUPEC, which enhances the community of local women in the bar/spirits industry through charity work, education and events.  She has also presented at Manhattan Cocktail Classic, Tales of the Cocktail, Portland Cocktail Week, the Boston Cocktail Summit and the Smithsonian.

Meaghan is a graduate of the prestigious 5-day Beverage Alcohol Resource program and Intermediate level WSET wine education.  She is the 2011 Metropolitan Opera Cocktail Competition winner, and was a national finalist in the 2012 Viva Sangrita Competition and Diageo World Class. She was a finalist in the 2013 International G’Vine Gin Connoisseur Program, taking home the “Best Technical Skills” award. Meaghan was a 2013 inductee in TOTC’s Dames Hall of Fame. Meaghan was named Imbibe Magazine 2016 “Bartender of the Year” and profiled by the New York Times in February 2016 for the unique success of her venues.