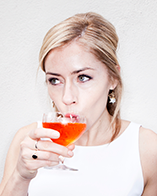 Best American Brand Ambassador, two times Golden Spirit Award winner at Tales of the Cocktail and recognized by the James Beard recognition for contribution to mixology, Charlotte Voisey is the Director of Advocacy for William Grant & Sons USA.

Host of The Proper Pour with Charlotte Voisey on www.smallscreennetwork.com, Charlotte has cocktail recipes published and placed on menus across the world including New York’s famed PDT, the iconic Dorchester Hotel in London and Whitechapel in San Francisco. In addition Charlotte seeded the cocktail programs at the Gramercy Park Hotel in Manhattan, Mandarin Oriental, Las Vegas, FIG at the Fairmont Santa Monica, Beautique and at W Hotels across the country. Charlotte has traveled the world but made her name at home in London. In 2002, with the Gorgeous Group, Charlotte opened classic cocktail bar Apartment 195 and was soon named UK Bartender of the Year. In 2005 Charlotte was invited to guest bartend at the Aspen Food & Wine Classic and consequently fell in love with the US cocktail community, one year later Charlotte officially made the move stateside to represent her favorite spirit, Hendrick’s Gin. Charlotte was named inaugural Mixologist of the Year for Wine Enthusiast Magazine and previously won silver medal at the World Female Bartender Championships in Italy. Other favorite accolades include her Punch & Judy named Cocktail of the Year by a panel of peers at Tales of the Cocktail in 2008. Charlotte’s passion for all things spirits and cocktails keeps her in an active speaking role at all major industry events including Tales of the Cocktail, Aspen Food & Wine, Las Vegas Nightclub & Bar Show, EPCOT Food & Wine, Roots and Barr Mexico.