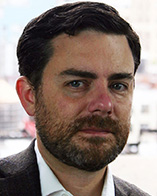 Clay Risen is an editor at The New York-Times, where he writes about spirits and the spirits industry, and the host of "Off the Shelf" on the Spirits Network. Among other honors, he won the 2017 narrative nonfiction award from the International Association of Culinary Professionals for his article on Nearest Green, the ex-slave who became the first master distiller at Jack Daniel's Tennessee Whiskey.

A native of Nashville , Clay's paternal family has lived in central Kentucky for over 200 years, while his mother's family immigrated from the Isle of Skye and Oban, Scotland. Oddly, neither side had anything to do with distilling. It took his step-grandfather, a Mississippian, to introduce him to the world of great whiskey — a bottle of Blanton's "The Original Single Barrel" Bourbon , to be specific.

Clay  is the author of “Single Malt: A Guide to the Whiskies of Scotland” and the best-selling “American Whiskey, Bourbon and Rye: A Guide to the Nation's Favorite Spirit.” He also writes regularly about American history, most recently the book “The Crowded Hour: Theodore Roosevelt, the Rough Riders and the Dawn of the American Century” — a story that incidentally involves the invention of the daiquiri.