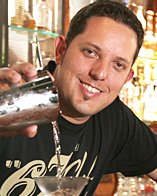 Jacques began his career as a bartender 16 years ago, working in bars and restaurants in South Africa. It was not until living in London that he grew to appreciate and love the art of bartending, eventually working his way to becoming a graduate of the prestigious BAR program in New York, directed by Paul Pacult, Steve Olsen, Dale De Groff, Dave Wondrich and Doug Frost. Upon relocating to San Francisco in 1998, Jacques began working at the Irish Bank Bar & Restaurant where he created what many believe to be the most extensive Scotch Whiskey selection in the Bay area. Since then, Jacques has been the opening consultant for a number of respected bars and restaurants, has served as a Brand Ambassador for Plymouth Gin, and recently accepted a position with Partida Tequila as their Cocktail & Tequila Ambassador.

Under the direction of Jacques and Julio Bermejo, Tres Agaves in San Francisco won the “Spirits Restaurant of the Year” award from Sante magazine in 2006. He has been voted Best Bartender in San Francisco by Anthony Dias Blue and is a judge in the San Francisco World Spirits Competition. Additionally, his community outreach has been instrumental to the launch of the United States Bartenders Guild chapter in San Francisco. Most recently, Jacques has taken on the role of Master Mixologist for Kimpton Hotels & Restaurants’ nearly 50 restaurants and bars throughout the country. As the chief consultant for Kimpton’s brand-wide beverage program, Jacques oversees the company’s individual and national spirits menus and works closely with newly opened Kimpton restaurants and bars on conceptual projects. Jacques spends his spare time learning about Spirits, Beers and Wines as well as visiting Distilleries and Wineries to further his knowledge.