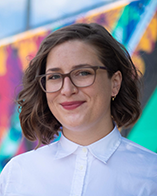 Chelsea DeMark’s career in spirits and libations started when she began to plot an escape from the day job she had secured after graduating with degrees in Mathematics and Philosophy. In 2012 she sought a part time job as a cocktail waitress, and found herself quickly promoted to bartender. A newly sparked curiosity rapidly grew into a consuming passion and DeMark ditched the day job to pursue bartending full time.

Chelsea had already honed her taste for exotic flavors via global travels, but she soon experienced an enlightenment when she moved to New Jersey in 2015 to work at 90 Acres, an upscale restaurant situated atop a farm. There she collaborated with a kitchen staffed with CIA alum and learned to apply culinary techniques to her cocktails. She regularly ventured out onto the farm and expanded her palette with seasonal experimentation, and fell in love with the concept of incorporating local produce into her creations.

DeMark returned to Washington DC in 2016 to pursue her career in a town teeming with creativity and opportunity. She secured a bartending gig at Denson Liquor Bar and was soon promoted to oversee the bar programs at two sister establishments, Sotto and Ghibellina.  In 2018, leaving behind 6 unique cocktail menus and a complete overhaul of the company’s spirits training program, Chelsea sought further growth as a bar manager under the Hank’s Oyster Bar umbrella at their Capitol Hill location.

Shortly after her move to Hank’s, Chelsea won the Mid-Atlantic regional for Speedrack, allowing her to advance to the national competition, where she landed a spot in the US top 8. As a result of her involvement with Speedrack, she was eligible to apply for the Jane Walker scholarship to BAR-5 DAY, which she was awarded. Excited for the opportunity to put her hard-earned knowledge and hard-trained palette to the test, Chelsea studied diligently for the rigorous course; she passed at the top of her class and was awarded Bar Ready with Distinction in January of 2019. Multi-tasking, Chelsea also passed her level one Sommelier exam and WSET 2 Spirits during this time, the latter also with distinction.

After a brief foray into the world of liquor distribution and sales, Chelsea returned to her home in hospitality. Today you can find her taking up residence at Quill, located in The Jefferson Hotel in Washington, DC, where she is happy to expound her knowledge upon any interested party. Quill was recently named one of the top 10 hotel bars in the US.