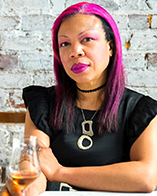 Franky is a hospitality industry veteran. She entered the New York City cocktail world by working at such notable bars as Clover Club, Monkey Bar, The Tippler, and The Dead Rabbit. She was the Bar Director/ Bartender-in-Charge at Le Boudoir Brooklyn where she created a widely recognized cocktail program and curated the wine, beer, and spirits lists.

Her proficiency behind the bar was recognized by Tales of the Cocktail when franky made their Top 10 list for American Bartender of the Year in 2017 and 2018, and when she was inducted into the Dame Hall of Fame in 2017. As the former Vice-President of the USBGNY, she made an impact with her emphasis on member education and mentoring Bartenders. She has continued that focus as part of the TOTCF Business Education Committee for the past two years.

Franky's accomplishments in teaching are official: she is a BNIC Certified Cognac Educator and Pineau des Charentes Educator. Amongst her other certifications are CMS Level 1, WSET Level 2 Certificate with Distinction, D.O. Cava and Armagnac Academies.

An experienced moderator and speaker, franky has presented at major events and cocktail festivals around the world including BCB, Cocktail Spirits, Invasion Cocktail, Paris Cocktail Festival, Prague Bar Show, Tales of the Cocktail, Vinexpo; and for Cornell University's Hospitality School and Diageo's Learning Skills for Life. She is also an in-demand MC, and has hosted the Angostura Global Cocktail Competition's 10th Anniversary, Bar Convent Berlin, and Speed Rack.

Sought after for her cocktails as well as her opinions, she has been featured in numerous books and publications such as Cosmopolitan, Food & Wine, Imbibe, Daily Beast, New York Times, San Francisco Chronicle, Spirits Business, Vanity Fair, and Wall St. Journal.