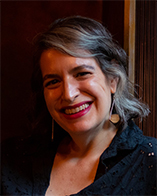 Amanda Schuster has an undergraduate degree from NYU in Medieval History and still can't understand why her parents let her do that. But after quite a few career turns (her best friend once said she's failed at more things than most people try, and she's proud of that) she eventually became a freelance wine and spirits consultant and writer based in Brooklyn, New York. She is the author of

New York Cocktails and Drink Like a Local New York (out summer 2022). After earning a certification with the American Sommelier Association in 2005, she went on to become the Assistant Spirits Buyer at Astor Wine & Spirits in New York City, followed by a stint as the spirits buyer for Morrell & Co. In late 2008, after witnessing the collapse of the economy from her office window there, as hundreds of employees across the way at Lehman Brothers hugged and cried in their cafeteria and subsequently carried out their belongings in cardboard boxes, she knew it was once again time for a fresh start and began to write. And write. Her words have appeared in Beverage Media, SevenFifty, Imbibe, The Whiskey Wash, Whisky Advocate, Bloomberg News and Forbes, among other publications. She also spent eight long years as the Editor in Chief of Alcohol Professor. If you google her, you will also find a few recent podcast appearances, as well as a video of her metalsmithing a necklace from back when she was a jeweler in the early 2000s.  As a trained expert in both wine and spirits, she considers herself bi-spiritual.
« back
Mission & Vision Why Enter USC? UBC Directors USC Judges Team USC Affiliates & Sponsors