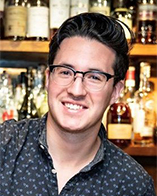 Ian Alexander is the Head Bartender at the Dead Rabbit in New York City, having joined the team in June of 2017, and works to apply his acute understanding of service standards to both the bar and the floor. He is passionate about cocktails and about creating a world class experience of Irish hospitality for every guest that walks into the bar.

In January of 2019, Ian graduated the rigorous Bar 5 Day course with distinction, and was in the top percentile in all areas of focus including blind tasting of spirits, cocktail history, spirit production, and bartending technique.

Ian began his career in cocktail bartending while attending Rutgers University in New Jersey, where he tended bar at Due Mari, a Chef Michael White restaurant, quickly working his way up to the Head Bartender position there. He became interested in spirits and cocktails and refined his knowledge under acclaimed Sommelier and Beverage Director, Hristo Zisovski.