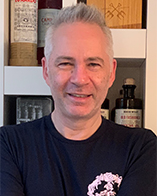 Tony Sachs thought he’d found his life’s work when he opened his own record store on New York’s Upper West Side at age 24. But in between hawking Alanis Morissette CDs, he developed an interest in cocktails, spirits, and vintage bar books. When the Internet dealt a death blow to music retail, he decided to figure out how to combine the only two other areas at which he was proficient — drinking and writing.

Totally unqualified for a position at a “real” publication, Tony learned on the job as the first spirits and cocktails blogger at the Huffington Post, beginning in 2007. HuffPost was an early adopter of the we-won’t-pay-you-but-you’ll-get-great-exposure gambit, but in this case it actually worked, and he quickly made a name for himself writing about all things boozy. The birth of his daughter in 2010 put an end to nights out at bars, so he pivoted to writing about spirits over cocktails, in the process amassing a collection of bottles that far outstrips the capacity of many small countries, to say nothing of his apartment.

Tony’s work has been seen in Robb Report, Esquire, Whisky Advocate, The Bourbon Review, Liquor.com, and Serious Eats, among many other publications. His column, What’s Tony Drinking?, debuted in Alcohol Professor in 2021. He is a member in good standing (he thinks) of the Bourbon Roundtable, a group of writers and industry professionals which gathers on a semi-regular basis to select batches of Booker’s Bourbon for bottling. He lives in New York City with his wife, daughter, and cat, and can often be found rummaging through his liquor collection, trying to figure out which rums to use in his next Mai Tai.