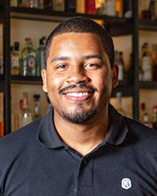 Born and raised in the Bronx, Chris got his start behind the stick while attending college in Maine. After graduating from Husson University, Chris helped run the bar program at Blaze bar and grill in Bangor Maine. After three and a half years, Chris moved back to NYC and started working as a bar back at The Modern where he honed his skills and moved his way to become a bartender. After some time bartending at The Modern, Chris transitioned to CrownShy where he began to work directly under Harrison Ginsberg and Executive Chef James Kent. Chris became head bartender and currently is the Bar Manager for Overstory, CrownShy and SAGA. Chris has gone through the BarSmarts program and now holds a Bar 5 ready certification.