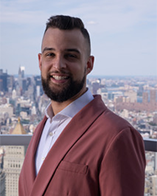 Chris is the Head Bartender for Overstory and SAGA in New York City. Overstory is ranked one of the 50 Best Bars in North America, and is the recipient of The Michter’s Art of Hospitality Award. Chris was also on the opening bar team of Crown Shy, a fine dining restaurant, which received a Michelin Star rating during his time there. Born in NYC, Chris' interest in the restaurant industry began at a young age. Growing up in New Jersey, his first jobs were on his family’s food truck and an ice cream store. While attending college in Rhode Island, Chris’ interest in cooking led to a love for cocktails where he tended bar at both The Eddy and The Dorrance in downtown Providence. He is a graduate of Johnson and Wales University, where he earned an undergraduate degree in Culinary Arts/Food Service Management, and a Masters in Business Administration. In 2020 Chris won Heaven Hill’s Bartender of the year competition, a distinction shared with a select few that year, attended Alain Ducasse Farm to Table Education Program, and is a certified graduate of the Bar 5 Day program.