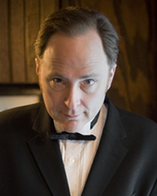 Brooklyn native James Conley is proud to call Keens Steakhouse his professional home. Since 1999, as Service Director at Keens—Manhattan’s historic, circa-1885 dining institution—James has communicated his passion for wine and service to the staff on a daily basis. Conley believes that building a restaurant staff’s wine knowledge gives every guest the opportunity to have a sublime wine experience. Keens Steakhouse is also noted for featuring more than 280 distinct bottlings of Scotch whisky. Presenting this unparalleled collection of single malts at Keens has allowed James to develop a deep, critical appreciation of the distiller’s art.

Prior to coming to Keens, James spent ten years gaining expertise in the classic cooking and fascinating, under-appreciated wines of Italy. As a captain at New York’s renowned Le Madri restaurant for six years, he honed his knowledge of the new Tuscan wines just as the category exploded. Next, while engaged in graduate study in anthropology at Brown University (giving special resonance to the notion of “the raw and the cooked”), he continued his immersion in Italian cuisine as a staff member at Al Forno in Providence, R.I., widely regarded as one of America’s most innovative restaurants. Back in New York, he became Operations Manager at Follonico, the intimate Tuscan destination in the Flatiron district.

Over the course of his 25-year restaurant career, James’ interest in the great wines of the world has led him to tour wine-making regions and speak with winemakers in such storied locales as the Napa Valley, Sonoma, the Cote d’Or, Alsace, the Loire Valley and Central Sicily.

For relaxation, Conley enjoys finger-picking an enticing melody on his ukulele or sipping a new discovery with his wife in a congenial enoteca.