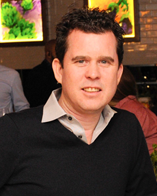 In a career that has spanned more than 25 years, with stops in multiple cities and countries, if you asked Paul how he got his start he would say: “Kitchen rat”. Mr. Tanguay spent the better part of his career working in different mom and pop restaurants, high volume brasseries, burgeoning mini chains and corporate establishments, toiling in different positions and learning the ins and outs of the business.

Mr. Tanguay is an accredited sommelier by the American Sommelier Association and considered one of the pre-eminent sake authorities in the United States. Paul completed, in March 2008, the first English language sake sommelier certificate from the Sake Education Council, passing both Level I and II.

He has been featured in multiple national publications and has made several television appearances. Paul was the winner of the 2006 Eastern U.S. Sake Sommelier Competition and ranked among the top ten at the 2006 World Sake Sommelier Competition in Tokyo, Japan. In 2010, he helped form the Sake Education Council; he currently sits on the board of directors as vice-president and treasurer.

His latest venture has him paired with master mixologist extraordinaire and alcohol aficionado, Tad Carducci, forming a new beverage consulting company called Tippling Bros. in 2007. Having first met as participants of the first ever B.A.R. (Beverage Alcohol Resource), the premier spirits & mixology organization in the U.S, they now travel wherever their work takes them, sitting on judging panels, lecturing on all things alcoholic and generally living the sporting life.

Mr. Tanguay is partner/beverage director for Mercadito Hospitality, whose locations in Mercadito Grove, Mercadito Ave B, Mercadito Chicago, Mercadito Miami, Double A, Tavernita, Little Market Brasserie and Tippling Hall with an upcoming location in Las Vegas. In addition, he is also a partner at The Tippler in New York City.

Paul splits his time between New York and Chicago and spends as much time as he can with daughter and family.