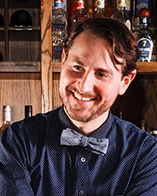 Joaquín Simó has traveled a long way from his native Ecuador in his search for the perfect daiquiri.  Raised amongst a Cuban family in Miami, he grew up eating fruits and vegetables fresh from his grandfather's farm and helping his father at his French bakery.  His epicurean roots firmly established, he sought out new seasons in New England, graduating from Boston University with a degree in English and religion.  He began tending bar in crowded college dives, raucous rock n' roll bars, neighborhood restaurants and trendy hot spots, all the while furthering his education on food, spirits, flavor combinations and balance.

As part of the opening staff at New York's acclaimed cocktail bar Death & Company, that English major finally got put to good use as he cheerfully regaled customers with the colorful stories and hallowed history of classic spirits and cocktails. Joaquín served as deputy editor for the 2009 and 2010 Food & Wine Cocktail books, contributing the Latin Drinks chapter, front and back matter, as well as recipe-testing both books.  He has also worked on several food-cocktail pairing dinners with underground supper club NY Bite Club. He was awarded BAR Ready status following his completion of the BAR Five Day Intermediate Certificate Program in September 2009 and was named one of Playboy's Top 10 Mixologists in 2009.  A finalist at the 2011 Spirited Awards, Joaquín was awarded the 2012 Spirited Award as American Bartender of the Year.  He has served as a panelist at Tales of the Cocktail, the Manhattan Cocktail Classic, Bar Convent Berlin, London Cocktail Week, Copenhagen Spirits & Cocktail, Paris Cocktail Spirits and Portland Cocktail Week.  Joaquín is also currently a partner in Alchemy Consulting, working with such clients as Diageo, Pernod-Ricard, and various hotels.  Joaquín can be found behind the stick at their NYC flagship bar, Pouring Ribbons, which opened in fall 2012.