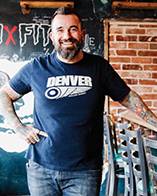 Sean Kenyon was born to be behind a bar. He is a third generation Bar Man, his Grandfather, Mother and Father have been pub owners and bartenders in New Jersey since the 1930's. At age 68, his father, Robert, is still behind the bar in Hackensack, NJ. Sean was raised in his family's pubs and while other kids wanted to be firemen or super heroes, he always wanted to be a Bartender (though he does still admit that the power of invisibility would be pretty cool). He first stepped behind the bar at the young age of sixteen and has never left. He developed a passion for classic cocktails and cocktail history and shows great respect for that history and methodology while finding influences for new creations in modern spirits, ingredients and techniques. As a founding member of the Colorado chapter of the   United States Bartenders Guild (COBG) he is passionately dedicated to furthering the art and craft of bartending and hospitality. Over the course of his 28-­‐year bartending career, Sean has managed bars   and cocktail programs in New Jersey, Austin, Texas and Denver, Colorado. In 2011, he realized a lifelong dream and opened Williams & Graham in Denver, CO. In 2013 Williams & Graham was nominated for a James Beard award for the nation’s outstanding beverage program. National media such as CNN, Food & Wine Magazine, Imbibe Magazine, Wall Street Journal and Esquire have recently recognized his   beverage programs. He also writes bartender / booze-­‐centric blog for Denver Westword’s Café Society. Sean feels blessed to be able to make a career out of something he loves so giving back to his   community has always been a top priority. He has coordinated or participated in charity events for the MS Society, The Denver Housing Authority, The Denver Rescue Mission, Salvation Army’s Angel Tree Foundation, The Gathering Place, Habitat for Humanity and Share our Strength. As well, in 2008 Sean   ran his first (and last) marathon, the Denver Marathon, to benefit the V Foundation for Cancer Research and raised over $5000.